Living in or near Houston where the METRO public transportation system is often inconvenient, you have likely been affected by urban roadway traffic. Even if you are a careful driver, driving in the busy city of Houston is risky.

Houston has been named the deadliest metro area in the United States, according to the Houston Chronicle. Car accidents in Houston are common; some you can avoid; others you cannot.

the most dangerous houston roadways

The I-45 in Houston was named the most dangerous stretch of roadway in the United States, according to ABC News. There are about 56 fatal car accidents for every 100 miles of roadway in Houston. Some of the most common reasons for these car accidents are drivers not obeying the traffic laws by texting while driving, drunk driving, or speeding.

The most dangerous intersections in Houston include:

the most common car accident locations

Certain locations in any major city are car accident hotspots due to increased traffic. 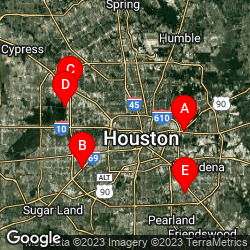 Want to feature this map on your site? Email [email protected]

Highways cause the greatest number of fatal accidents because cars are traveling faster there than on city or residential roads. Collisions at high speed can cause more damage and are therefore more likely to be deadly.

Parking lots, intersections, and rural roads are other common locations for car accidents. These can happen because drivers are not paying careful attention. If a driver runs a red light or a stop sign at an intersection, other drivers are at risk of hitting them when it is their turn to enter the intersection. T-bone crashes are a common type of accident at intersections.

Rural roads can be dangerous because even though they are not as busy as major highways, drivers may become fatigued from covering long distances or travelling at night, or they may drive more recklessly, thinking no other drivers are around. Speeding is more common on rural roads and drivers may neglect to wear their seat belts if they do not think they will get a ticket. Rural roads may have more sharp curves and also be narrower than highway roads, which increases the need for careful driving.

Rush hour traffic can cause drivers to become impatient; impatient drivers are more likely to drive recklessly. Drivers may also allow themselves to become more distracted since traffic is moving slower; a driver may choose to text or browse through their phone and not pay attention when other cars are moving. Rear-end accidents are common in slow traffic areas, especially during rush hour.

Approximately 640 people die every year on Houston roadways, with almost 2,900 more being seriously injured. Some factors that lead to lethal car accidents include:

The Houston Chronicle estimates that four out of five people drive almost 30 minutes for their commute. Drivers usually commute alone, which may increase fatigue as drivers are not able to interact with a passenger to stay awake.

Some areas of Houston, like the Grand Parkway, have speed limits of 75 miles per hour. These high speeds allow traffic to move quickly around the metro area, but high speeds create less room for error and can make car accidents more dangerous.

Many Houston and Texas politicians oppose automated enforcement such as cameras. Cameras would be able to catch those exceeding the speed limit or running red lights, but state lawmakers have restricted their use. There is also a ban on sobriety checkpoints in some areas, which may make drunk driving easier to get away with.

Houston police officers issued 41 percent fewer speeding tickets in 2017 than in 2012. On average, there are about 11 fatal car accidents a week in Houston. The reason that drivers speed in Houston is because they feel like they will not be ticketed.

how to avoid car accidents

Drive defensively by anticipating what other drivers may do on the road and avoiding situations that could cause you to get in a car accident. This includes not speeding and following the flow of traffic. If you have to drive slower than the traffic around you, keep your hazard lights on and drive in the far-right lane, which is the designated slow lane.

Do not follow too closely behind other cars, and allow enough space to brake and stop. Weather conditions such as rain or ice may make slowing down harder to do quickly, so adapt your driving to these changes.

Not wearing your seat belt could cost you a fine or court fees up to $200. Children younger than eight must be secured in a child safety seat or a booster seat rather than a seat belt; if they are not properly restrained, the driver could face fines of up to $250, not including court costs.

Avoid distractions such as using your cell phone. Texting while driving is illegal in Texas, so do not text and drive, and avoid taking phone calls, even if you take them hands-free. Talking on a cell phone while driving is banned in some cities in Texas, but choosing to talk on the phone and drive could distract you. Pull over to take a call or answer a text message if it is urgent.

Do not eat or do other activities in the car that could distract you from driving, such as applying makeup. Even dealing with children in the car or other passengers may become distracting, so be sure to keep your focus on the road or pull over.

a car accident lawyer can help

Any car accident, whether it is minor or major, can leave you at a loss for what to do. How will you pay for the damages to your car and who will pay for the injuries to yourself or passengers? An experienced car accident lawyer can help you answer these questions and navigate your claim.

Further, a lawyer can help you know what evidence to collect to preserve your claim. A lawyer will also be able to help you assess all of your damages, both present and future harm, and calculate a fair recovery settlement for you.

Be sure to see a doctor after any car accident, even if you feel that it was minor. You will want to document any injuries. Some injuries may not be felt at the scene of the car accident due to shock or adrenaline, but a licensed physician will be able to assess you.

An experienced car accident attorney will know how to best structure and present your case to ensure the highest possible settlement award available. Insurance claims adjusters are looking to pay out as little as possible. Do not allow them to diminish your injuries.

At Zinda Law Group, our car accident attorneys in Houston are experienced and have handled many cases involving victims of minor or fatal car accidents. We have the knowledge and resources necessary to help you determine what to do next and to help recover the best possible outcome for your case.

Call us today at (800) 863-5312 for a free and confidential consultation with one of the best car accident lawyers in Houston, Texas. At our firm, we are no win, no pay lawyers. You will pay nothing unless we win your case. That’s our No Win, No Fee Guarantee.