Contact Us Today
Home/It’s a Robot, It’s a Pedestrian, It’s Both

It’s a Robot, It’s a Pedestrian, It’s Both 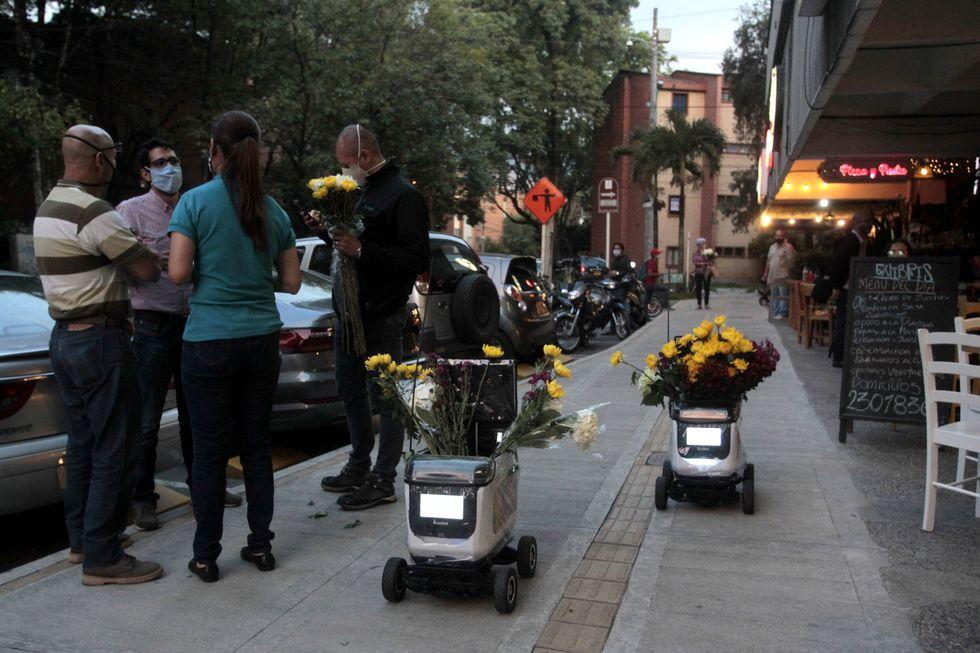 Courtesy of Car and Driver

It’s a robot, it’s a pedestrian, it’s both! For decades, automated technology has been largely confined to high-tech manufacturing facilities and other similarly controlled environments. Today, this model is being gradually displaced as prominent companies—examples include Amazon and FedEx—experiment more and more with automated deliveries to consumer doorsteps. This begs the question, “To what extent will robots be treated as pedestrians, and will people need robot pedestrian accident lawyers?”

By and large, legislatures and regulators have responded enthusiastically. Many have sought to facilitate the transition by reclassifying autonomous delivery robots as “pedestrians.” The legal risks and consequences remain largely untested.

Whether ordering pizza from Domino’s or receiving a package from UPS, doorstep delivery of goods has mostly been conducted by human beings for decades. Two factors have contributed to a broad erosion of this status quo.

First, automated technology has become much more advanced. Earlier technology largely limited automated robots to use in factories, warehouses, and other controlled spaces. In these environments, obstacles and stimuli are more easily anticipated, and automated machines can be programmed accordingly.

Things become much more complicated when introducing automated machines to “dynamic” environments, such as roads and sidewalks. To operate safely in these unpredictable, pedestrian-heavy environments, robots need to react more like humans. That is, on some level, they must be “aware” of their surroundings. For example, a driverless car must be able to brake safely as it approaches a red light, and delivery robots on sidewalks must sense when it is safe to cross a road.

This level of sophistication was simply not available or cost effective in the past. Today, things are different. Researchers and engineers, both at private companies and in university laboratories, have worked out many of the kinks that previously constrained automated robots to  repetitive roles in static environments. Yet, many kinks remain before automated robots are fully capable of “socially aware navigation.”

Second, consumer expectations have shifted dramatically over the past decade. Services like Amazon Prime and UberEATS have become enormously popular, and consumers have come to expect (1) ever-quicker delivery and (2) an ever-greater range of deliverable consumer products.

This trend became more entrenched in large part due to the now-waning pandemic. From groceries to takeout to packages, the most forward-looking companies are eager to satisfy consumer appetite by deploying automated robots. Soon, even hospitals and hotels may be filled with robots tending to patients and guests.

Notwithstanding, if you have been injured by an automated robot in a public space, you should not hesitate to speak with a pedestrian accident lawyer. In any personal injury case, speaking with an attorney as soon as possible greatly increases your chances of securing satisfactory compensation for your injuries.

The Brave new world of automation: A closer look

Automated robots have a wide range of applications, and many prominent companies are seeking to cash in. Even some police departments see potential. However, automated delivery remains largely experimental, and its limited introduction has not been without controversy.

In January 2019, Amazon introduced its new delivery robot, Amazon Scout. Six of these cooler-sized Scout robots were experimentally introduced in California, Georgia, Tennessee, and Washington state. Paul Reverdy, one of the applied scientists working on developing and deploying Scout, explained the challenge as follows:

Scout has to make a lot of decisions. . . Some are pretty high level, such as deciding whether it should cross a street or not. Then there are very discrete decisions it must make, such as ‘Can I get through the gap between the hedge and the trash can?’

Hamed Pirsiavash, another scientist on the team, explained, “The goal is similar to self-driving cars, with the main difference that Scout mostly travels slowly on sidewalks.”

Other companies seeking to integrate automated deliveries into their business models include Domino’s Pizza and FedEx. To achieve this goal, both companies have partnered with Nuro, an American robotics company.

Domino’s introduced its partnership in April 2021 with the stated goal of  “[being] the first quick-service restaurant company in the U.S. to launch autonomous pizza delivery.” Currently, the pizza delivery service is being tested in Houston, Texas.

In the same month, FedEx entered into its own partnership with Nuro. Together, they introduced Roxo, FedEx’s experimental delivery bot. FedEx has explained that “[f]urther testing is being planned, targeting customer use cases like: auto parts, pizza delivery, home improvement, general merchandise and groceries.”

However, like other automated robots, Roxo was not greeted with universal praise. Perhaps some of the most high-profile criticism came after Roxo visited New York City for a “special event.” Former mayor Bill de Blasio, complained in a tweet, “We didn’t grant permission for these to clog up our streets. If we see ANY of these bots we’ll send them packing.” His spokesman, William Baskin-Gerwitz, added, “[W]e’re hopeful last month’s event was the end of this experiment, but we’re prepared to take further steps if FedEx were to bring them back onto our streets.”

Drones represent another area of high potential for automated deliveries. Over the past decade, drones have become increasingly common. Today, everyday pedestrians often see them hovering above streets and parks across the country.

This development has not escaped the attention of lawmakers and regulators. As early as 2012, a bill known as the Federal Aviation Administration (FAA) Modernization and Reform Act was proposed in Congress. Though the proposed act never became law, it emphasized that, “[a]s the technology advances and the cost decreases . . . the market for Federal, State, and local government and commercial unmanned aircraft systems is rapidly growing.” The proposed bill “estimated there could be as many as 30,000 unmanned aircraft systems in the sky in the United States by 2020.”

Prominent companies have also taken note. As early as 2013, Jeff Bezos estimated that Amazon’s drones could carry about five pounds of deliverable goods, covering about 85 percent of Amazon’s products. Six years later, in April 2019, the FAA certified Wing Aviation, a drone company owned by Alphabet (parent company of Google), to operate as an airline. Certification allowed the company to begin experimenting with its fleet of delivery drones.

A few months later, the FAA then certified UPS to for drone-delivery of medical supplies. Just over a year after that, the FAA also certified Amazon, allowing it to operate its fleet of Prime Air drones.

Like on-the-ground automated delivery, automated-drone delivery is still largely in an experimental phase. Yet, though there are still many hurdles to clear, demand and potential remain high.

Perhaps less obviously than consumer-good delivery, automated robots have also been used for surveillance by police departments across the country. From Boston to Honolulu to New York City, police departments have been deploying four-legged robots for a wide range of purposes, from monitoring vagrancy to investigating burglaries. They have even been used to inspect sites thought to contain hazardous materials. The robots allow police to surveille dangerous situations before entering the scene, thereby protecting officers.

Because they look like futuristic canine companions, the robots have been variously nicknamed “Digidog” and “Spot.” However, their uncanny agility, unsettling appearance, and potential for abuse by law enforcement have created a strong air of suspicion among civil rights groups. Jay Stanley, an analyst at the American Civil Liberties Union (ACLU), summarized as follows to the New York Times: “We do see a lot of police departments adopting powerful new surveillance and other technology without telling, let alone asking, the communities they serve. . . So, openness and transparency is key.”

Recognizing the transformative effect automated-delivery technology may have as it continues to develop over the coming decade, legislatures across the nation have begun establishing corresponding regulation. Surprisingly to some, many states have adopted laws allowing delivery robots to use public spaces as though they were pedestrians.

This section explores some of the basic regulations in a handful of jurisdictions. However, it is worth emphasizing again that the impact of these regulations on personal injury liability remains largely untested. Regardless of your jurisdiction, the pedestrian accident lawyers at Zinda Law Group are ready to handle your case. Our attorneys will evaluate the facts of your case, gather evidence, investigate the governing law, and ultimately help you craft a strategy to secure maximum compensation.

In Texas, “personal delivery devices” (PDDs) can now be found from college campuses to city streets. PDDs include devices “manufactured for transporting cargo in a pedestrian area” and that are “equipped with automated driving technology . . . that enables the operation of the device with the remote support and supervision of a human.” In general, these devices must comply with the same rules governing pedestrians.

Specifically, when in pedestrian areas, these devices may operate at a maximum of 10 mph; when on roadways or highway shoulders, the maximum increases to 20 mph. If operated at nighttime, lights are required. Pedestrian areas include sidewalks and crosswalks. PDDs must also “yield the right-of-way to all other traffic, including pedestrians.” They may not “unreasonably interfere with or obstruct other traffic, including pedestrians.”

Arizona law governing PDDs are similar to those in Texas. Again, they must comply with the same laws governing pedestrian behavior:

The law in Colorado is somewhat less developed. However, the legislature has taken time to define “personal delivery device.” Its definition echoes those in other states. A PDD in Colorado means an “autonomously operated robot.”

More specifically, it means a robot that is designed and manufactured for transporting goods “primarily on sidewalks, crosswalks, and other public rights-of-way that are typically used by pedestrians.” PDDs must not weight more than 500  pounds. Further, they must operate at 10 mph or less when in public rights-of-way “typically used by pedestrians.”

In pedestrian areas, PDDs may not operate at more than 12 mph; along roadways, they may not exceed 25 mph. Additionally, they must comply with the following maximum dimensions: width (32 inches); length (42 inches); and height (72 inches). They must be equipped with front and rear lamps that visibly emit a beam of light of at least 500 feet.

They must obey “all traffic and pedestrian control devices and signs.” When on sidewalks and crosswalks, they must not operate at more than 10 mph. They may not block any public rights-of-way.

Read more: Glaser, April. “Virginia is the first state to pass a law allowing robots to deliver straight to your door.“ Vox, 1 March 2017.

Our robot pedestrian accident lawyers ARE READY TO FIGHT FOR YOU

Doorstep delivery has traditionally been conducted by humans. However, in recent years, as demand increases for quick and efficient delivery of consumer products, autonomous delivery has gained quick steam.

This development has not been without controversy. Regardless of which side you align with in the debate, robot delivery in public spaces remains largely experimental, and the legal waters remain largely untested.

At Zinda Law Group, we are ready to defend your legal rights. If you or a loved one was injured in a pedestrian accident involving an autonomous delivery robot, call Zinda Law Group at (800) 863-5312 for a 100% free case evaluation with one of our pedestrian injury lawyers. Our clients pay nothing unless we win their case. That is our No Win, No Fee Guarantee.